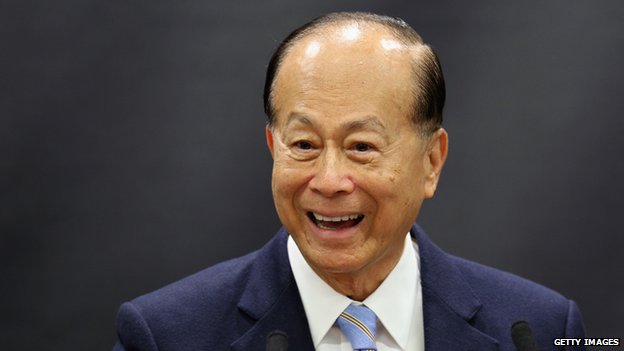 BT in talks to buy EE for £12.5bn
Hong Kong reforms ‘must be passed’

Asia’s richest person Li Ka-shing is in talks to buy Britain’s second-largest mobile provider O2 for up to £10.25bn ($15.4bn) from Spain’s Telefonica.

However, the move could face tough scrutiny from competition regulators.

It would reduce the number of major operators in the UK from four to three, which might not benefit consumers.

Hong Kong tycoon Li Ka-shing has been snapping up mobile networks around Europe, recently acquiring Orange in Austria and O2 in Ireland.

Asia’s richest man is poised to take control of the UK’s biggest mobile phone network, after Three announced it had started exclusive takeover talks with its larger rival 02.

Li Ka-shing has an estimated fortune of $34.1bn (£25.5bn) from his sprawling empire of ports, utilities and property, according to Forbes. His conglomerate, Hutchison Whampoa, is the parent company of Three, which confirmed it was ready to pay £10.25bn, mostly in cash, for larger rival 02. The deal would create the UK’s largest mobile phone firm with 31.5 million customers, cutting the number of network owners in the UK from four to three.

From smartphones to sewage treatment, perfume to power lines, 86-year-old Li Ka-shing has a long list of business interests in the UK.

But the £10.25bn deal being negotiated between his conglomerate Hutchison Whampoa and Telefónica’s O2 would be his biggest stake yet.

This week he added Eversholt Rail to his portfolio. His Cheung Kong Group also owns Northumbrian Water, Wales and West Utilities and has a stake in Southern Water.