Car sales are falling in China this year but one brand is speeding ahead: The national “Red Flag” sedan is flying high, powered by purchases from the government, state companies and patriotic citizens.

Beloved by Chairman Mao Zedong, the luxury car — “Hongqi” in Chinese — is getting a new lease of life as President Xi Jinping makes a push for national economic “self-reliance” amid a trade war with the United States.

The black sedan with a chrome grille and a raised red stripe at the tip of its hood is best known for ferrying Xi and other Communist Party honchos around.

But state-owned airlines, banks, telecom operators and even steel mills have shelled out to build their own fleets in recent months.

“It’s our national brand for our company’s management,” said Xue Ning, a purchasing manager, noting he did not know how many the firm would buy.

A state tobacco company in the southern city of Jian just received its first 15 cars, while state telecom firm China Unicom is supplying branches across the country.

“State-owned enterprises should drive state-produced cars,” said Li Gang, who coordinated the purchase of a Hongqi sedan for the general manager of a China Unicom branch in Henan province.

“It’s an image issue, especially when our leader is driving to meetings. Before we were only using Toyotas or Hyundais, but if you’re driving a Hongqi the image is different.”

Soon after coming to power in 2012, Xi instructed officials “not to be seen always riding in foreign cars.”

Provinces rolled out purchasing regulations benefitting “domestically-developed” cars like the Hongqi brand, which was revived by FAW in 2012.

Once ubiquitous black Audis circling the nexus of power in Beijing have gradually been replaced by the new black Hongqi sedans.

FAW also built those Audis — but in partnership with Volkswagen.

Overall car sales in China are set to fall this year for the first time in decades as the economy slows — but Hongqi sales have jumped 662 percent in the first 10 months of the year from the same period last year, to 23,838 vehicles, the company said.

The car industry is set for a major shift after Xi decided to begin relaxing ownership rules, which had long restricted foreign automakers to holding no more than a 50 percent stake in their China operations.

But the liberalisation could still fuel favouritism for state companies.

Xi has preached the need for China to develop on its own and pushed industrial policies that favour domestic companies like the state-owned FAW Group.

The government’s major “Made in China 2025” policy calls for domestic carmakers to control 80 percent of the electric vehicle market by 2025 as Beijing phases out fossil fuel cars.

“When I’m driving it, my mood is very comfortable, very proud, not like the discomfort I feel when driving a foreign car,” Yuan said from a Hongqi showroom.

This file photo taken on June 25, 2018 shows a Chinese-made Red Flag limousine used by French Prime Minister Edouard Philippe parked outside the Great Hall of the People in Beijing. Car sales are falling in China this year but one brand is speeding ahead: The national “Red Flag” sedan is flying high, powered by purchases from the government, state companies and patriotic citizens. 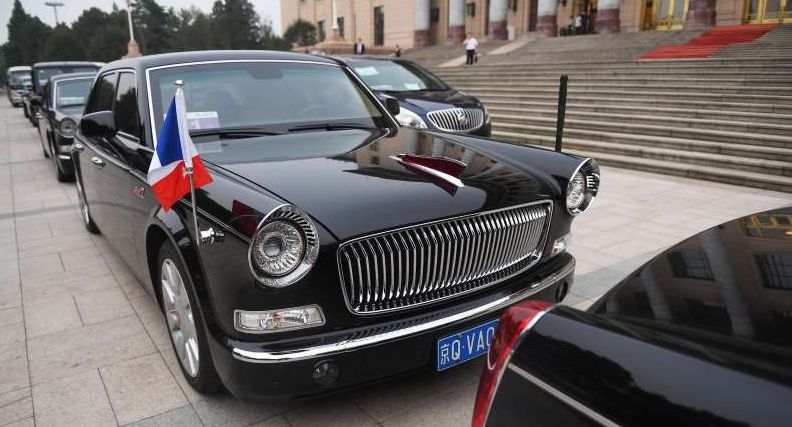 “In the hearts of our people, no brand can replace Hongqi,” said FAW party secretary Xu Liuping.

“It brims with deep national sentiment, and the long-cherished wish to rise as a great power has been placed on it,” Xu told the Global Times this year.

FAW is rolling out more than a dozen new Hongqi models by 2025, including two luxury SUVs and many electric models while developing an autonomous car in partnership with tech giant Baidu.

The expansion requires capital: in October, 16 banks, including policy and state banks, announced a credit line worth more than 1 trillion yuan ($146 billion) to FAW — enough to purchase GM, Ford and Fiat Chrysler at their current valuations.