[GDP] By 2030, economies like China and India will hold dominance over the West

By 2030, economies like China and India will hold dominance over the West – and influence our decisions

Some 70 per cent of the growth over the next 12 years will come from emerging markets.

China passes the US to become the world’s largest economy by 2030, while India overtakes Japan, Germany, the UK and France to become number three. The economies of the emerging world as a whole become bigger than those of the developed world. Lots of people are curious about what happens after China’s GDP surpasses America’s and, thanks to the International Monetary Fund, we know the answer. Here’s what the IMF found in 2015 and projected for the next few years (its figures underestimated China’s growth rate):

Naturally, when people heard that China’s economy had dwarfed America’s they began investigating.

The Peterson Institute of International Economics applied living and production costs differentials between China and the U.S. to estimate the actual size of China’s economy and found that the Chinese economy passed the USA’s in 2010, when they were both around $14.5 trillion, and China is on track for $28.8 trillion in 2020: Is China Already Number One? New GDP Estimates.

Persistent skeptics paid The Center for Strategic and International Studies in Washington, D.C., to verify the data independently. Their 2015 report, Broken Abacus, stunned experts by concluding that China’s economy is 15 percent larger than official figures.

The Federal Reserve commissioned researchers to dig deeper and see if China’s figures can be trusted. Their report, On the Reliability of Chinese Output Figures, concluded that “alternative domestic and foreign sources provide no evidence that China’s economic growth was slower than official data”.

So we are already living in a world in which China’s GDP is much bigger than America’s and is growing four times faster.

And what will happen now is that President Xi will give more speeches like the one he gave last week, in which he said, “The Chinese nation … has stood up, grown rich, and become strong – and it now embraces the brilliant prospects of rejuvenation … It will be an era that sees China moving closer to centre stage and making greater contributions to mankind.”

So perhaps we should follow the prediction of Nobel economist Robert Fogel: “China will have a $123 trillion economy by 2040. By then, the country will account for 40% of the worlds gross domestic product and be superrich. The American economy, by way of contrast, will produce only 14% of global output. And Europe? The E.U. will claim just 5%.” 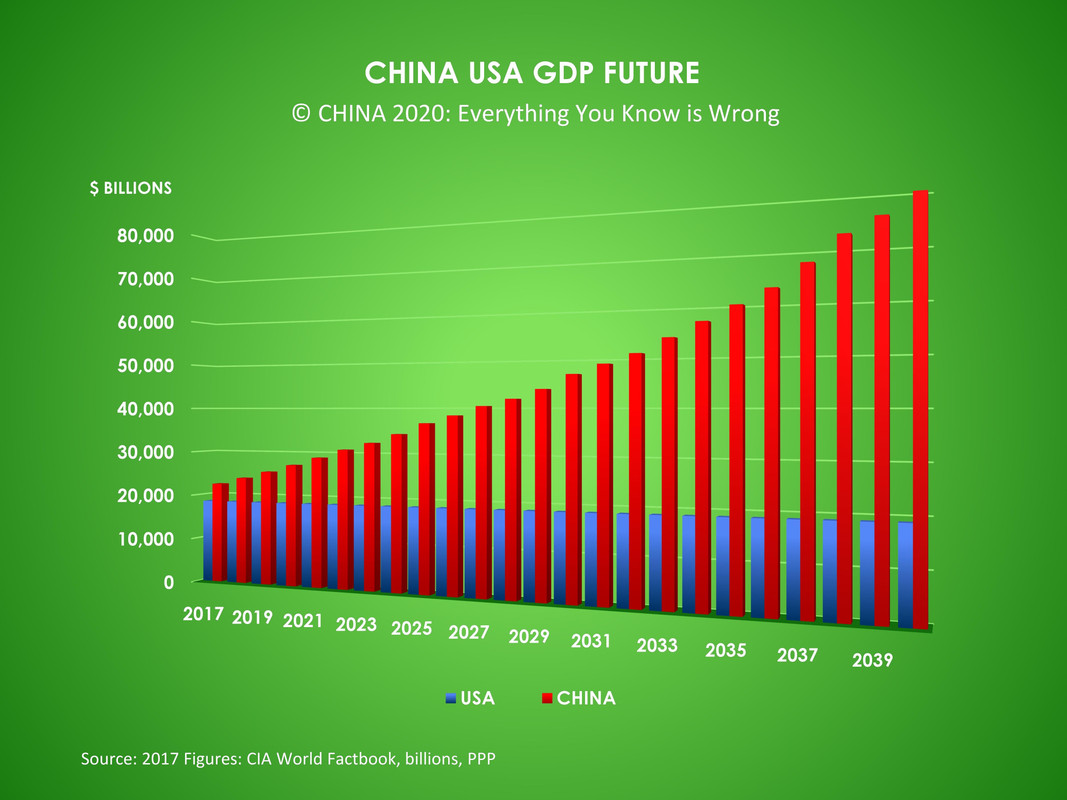